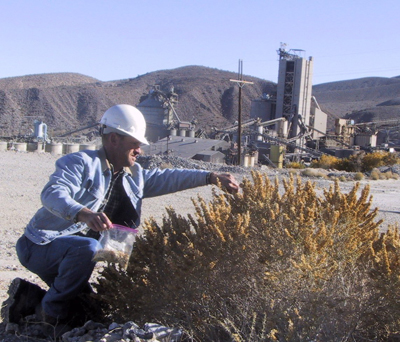 To maintain the mountain’s genetic plant diversity, seed is collected on site. The collection of seed takes place approximately nine months out of the year, (there is always something blooming). Seeds vary in size. They can be as large as a thumbnail, [Bigberry Manzanita, California Juniper, Piñion Pine] or as small as a pinhead, [Whisk Broom Buckwheat, Rattlesnake Weed, and Paper-Bag Bush]. Native plant seed dispersal at this site comes in every imaginable form. Some look like helicopters, a few have wings, while others can have hooks, or bladders, and even cotton balls. Currently, as seed is collected, it is stored on site in the seed storage freezer until it is either dispersed to a custom plant propagating company, educational research facility, or used in direct seeding.

Prior to mineral mining a permitted site, we go into the old growth forest ahead of the heavy equipment and remove the native plants that can be potted in up to a fifteen-gallon size container. Soil structure and terrain are the limiting factors in salvaging larger plants. Our highest survivability successes for many salvaged species has come from direct transfer from one site to another with no containerized holdover time; thus transferring the AM fungi with the plant. When the conditions are not conducive to direct transfer, plants are potted into a soil mix that we developed with primary concerns regarding long-term storage. Plant species are then identified and marked with date of salvage. They are stored in the on-site shade house until outplanting is possible.

After salvaging a permitted site, the larger forest species are extracted and stored for later use. 10-18 inches of the topsoil are then removed, transported, and stockpiled at designated sites around the quarry. When an area of the quarry is completely mined, the bench is trimmed back to a width of thirty feet. The stored topsoil is mixed with salvaged organic material (larger forest species) and waste rock from the mining operation. The waste rock should not exceed two feet in diameter. This mixture of naturally occurring material is then transferred to the finished benches.

This model was created to give a clearer understanding of the ‘ISLANDS’ concept. Once these islands are created outplanting can begin. NOTE: RIDGES AND VALLEYS. 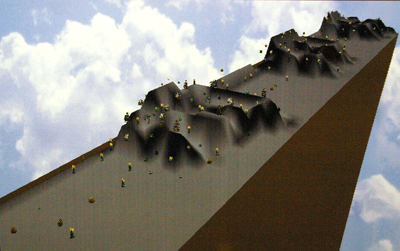 This model does not depict the spread of seed and plant growth in the open areas around and between the nurse islands that will take place over the years, once out-plantation of seedlings occurs. 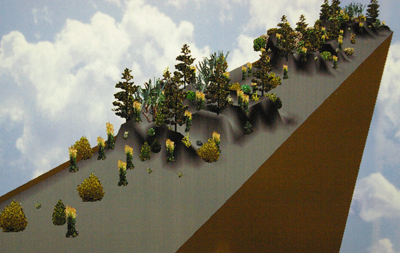 The Mojave Desert experiences very little precipitation. When rainfall occurs, a significant amount of moisture is lost to evaporation. The typical dry air mass and winds of the desert contribute to the Mojave being the driest desert in North America. Winter precipitation in the form of snow and rain provides over three-quarters of the average fifteen inches of moisture received at this site annually. Data recorded during the last five decades in this area indicate that there are years when the total annual rainfall is only six inches, and has been as high as thirty-four inches.

Irregular precipitation is detrimental to wasteland recovery. Seed will not germinate and seedlings will not develop the proper root structure needed to support vigorous plant growth. The native plant associations with AM FUNGI may not take place without moisture present during the critical first year after the out-planting of any given site in this arid landscape.

Supplemental watering is needed to achieve survivability of young seedlings. Research in cost effective irrigation began by using schedule 40 pvc pipe, micro sprayers, and rainbirds. All three were failures. The pvc pipe could not tolerate the temperature extremes or rock fall of boulders as large as 200lbs., which shattered the pipe on a regular basis. The rainbirds and micro-spray irrigators did not get the water to root zones of the seedlings. These sprayers also promoted high weed germination. The solution is the use of a poly-tube system. This system offers ease of installation, terrain following capabilities, an ability to sustain falling rock with minimal damage, as well as weather extremes. This system also incorporates individual plant flag drippers to get the water to the root zones. This arrangement is reusable, and can take the punishment that this site promises. A one-half mile stretch of land can be installed with this system in four days with the help of only three laborers. Supplemental watering of a given reforested site is intended to last for a maximum of two years. The first year involves weekly irrigation during the hottest/driest months. The second year, the system is left in place to use in extreme drought conditions.

A thin layer of topsoil, 2-4 inches thick, is spread across the entire bench, and then additional topsoil is brought in and dumped in thirty to forty foot – long piles. These piles do not exceed three feet in height, are irregular in shape and size, and have ridges and valleys to create micro-climates. The micro-climates are conducive to the protection and growth of young seedlings. The piles are called ‘ISLANDS’ or micro-nurse pods. Distance between the islands should be equal to the length of the island (a thirty foot long island could have an open space of thirty feet before the beginning of the next island).

The answer is this: Prior to the later half of the 1980’s, there was less regulatory oversight. The valuable topsoil was considered waste, and used to fill valleys on this site. Thus, when Mitsubishi Cement Corporation purchased the plant, they inherited an environmental issue: LACK OF STORED TOPSOIL. Mitsubishi Cement Corporation’s solution to this lack of growth media is straight forward: use the topsoil from the newly permitted quarry to restore both the existing and the new site using the island outplanting concept.